My Angel is a Centerfold 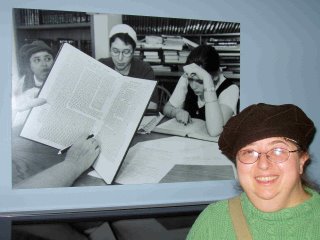 Or at least, an exhibit at the Jewish Museum.

We had been told by others, but we didn't see it for ourselves until last week. In their series on Diaspora Jewry, the small Talmud section (a few antique and not-so-antique Talmuds, and two photographs of adults (women at Drisha) and children learning Talmud) has a picture of my lovely wife Debbie.

If you can't pick her out, she's the one on the left, as well as the one in color.

A photographer came around one day and took pictures. They appeared a week later in a local paper. We thought that was the end of it, until a neighbor said "We went to the Jewish Museum, turned a corner, and there was your wife!"
Posted by thanbo at 6:50 PM