Here's something I've long found interesting. The Morgan Library has recently put its copy of the Gutenberg Bible, Old Testament, online. Here's the beginning of Genesis: 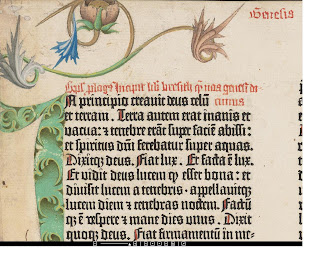 Beautiful illumination, the text beginning A principio creavit deus (note, no capital on Deus, much like German translations of machzorim that don't capitalize gott).

But it's the rubric (the handwritten introductory line in red ink - red in Latin is rub-, like ruby, or bilirubin - hence "rubrics" are written in red ink) that's really interesting. I first noticed this when in Washington I bought a facsimile (for a dollar) of the first page of the Library of Congress' Gutenberg Bible, mostly to get change for the Metro (no change without purchase, doncha know). Here's the rubric enlarged:

Translated, that's "Beginning of the book Breshith, which we call Genesis." So the bookmakers in Germany, printing in Latin, knew the Hebrew name and first word of the book of Genesis, and thought that its proper name.

Similarly here, at the beginning of Numbers, "Expl' liber levitice Incipit vaiedaber.i.ib' nui' ". End of the book of Leviticus, Beginning of Vayedaber or Book of Numbers.

And so on through the Bible.

Interesting, no? Hebrew survivals in the first German production of the Latin Vulgate, long before the rise of Christian Hebraism among Germans in the 1600s with Buxtorff, Leusden, Knorr von Rosenroth, and others. There was some Hebraism among the English in the 1500s; Henry VIII was rumored to have read the Talmud.

Looking through the latest 730-book list from Hebrewbooks.org, a few caught my eye:

I received an announcement of the formation of "Rabbis in support of the Women of the Wall." It's supposedly interdenominational - including rabbis of Ortho, Cons, Reform and Recon.

Um, yeah. Looking up Rabbi David Kalb, the one O rabbi, his smicha is private not institutional (i.e. not sufficient to join the RCA - you need one recognized institution or two private smichas). He's also associated with the lefty-est institutions within Mod-O. How many O rabbis, even Mod-O rabbis, are going to want to join with an overwhelmingly Reform/Recon group to support a Reform women's group?

I think it reflects reality: WotW is not really interested in appealing to Orthodox women any more, or to Orthodox institutions. It's run by a Reform activist, after all. Its chair, Anat Hoffman, is the head of the Reform lobby in Israel.
Posted by thanbo at 4:16 PM 1 comment: