So which is more elitist:

an urban activist candidate, Harvard educated, noting that rural folks are embittered because of the loss of jobs, and take comfort in the comfortable, which is fed to them by the government.

a 20-year First Lady and high-powered corporate lawyer candidate, Yale educated, telling rural folks that they don't know how to feel - they should feel offended at the first candidate's remarks?

Most of the responses from rural Pennsylvania and other depressed-small-town areas to Obama's remark seem to be "yes, that's an accurate assessment, we are pretty bitter over loss of jobs and government's inaction other than to feed us comfort food for guns and religion." But the other candidates, desperate to find something, anything to use against the first candidate, jump on this, and the Yale lawyer and the scion of the Navy dynasty tell the rural people that they don't know enough how they feel, that they should feel offended so as to serve their ends.

Who are the real elitists?

The mishnah is wrong.

Or at least, the Vilna Shas’ version has problems.

I’ve occasionally tried to learn Ketuvot on my own, and tend to get bogged down by the middle of the first page which already has me branching out into this that and the other, even unto Shev Shmatetha (Shmaitza?) to explain Sfeik Sfeika.

I found some notes from R’ Wieder’s fall 2002 shiur on Ketuvot at SwapNotes.com (the successor to YUMesorah), which cleared up something that had always bugged me about that mishnah. The first phrase: “A besulah is married up to the fourth day.” But the subsequent discussion in the Gemara treats it as “is married ON the fourth day”, so that he can run the next morning to Beis Din if he has a claim that she wasn’t a virgin, and wants the marriage annulled for false advertising.

R’ Wieder notes that the Mishnah manuscripts have bayom revi’i, ON the fourth day. Only Tosefta has layom, TO the fourth day. I checked both Yerushalmis I have at home (facsimiles, of course) the and Vilna editions, and both had bayom, contra the reading in the Vilna Bavli. 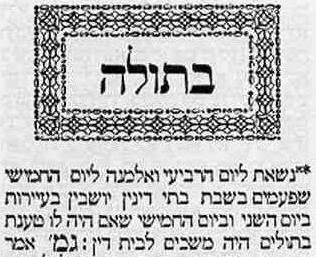 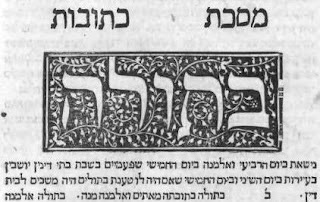 Although in all honesty, the editio princeps of the Bavli also has layom. 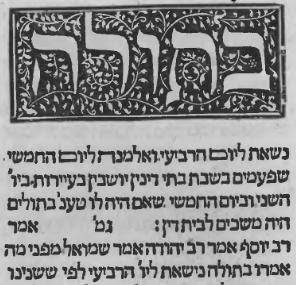 Still, those woodcut initial words are lovely, aren’t they? Makes the mass-produced ornament type for the Vilna shas look cheesy. That sort of ornament is often done with movable lead type just as the words are.

Evidently, Bomberg just recycled the same blocks cut for the Bavli (1521-23) into his Yerushalmi edition of 1523.

Posted by thanbo at 7:17 AM No comments:

Did you know that the “democratic process” rules in the selection of a Shliach Tsibbur?

The one who is chosen to lead the service- anytime, at any minyan in the Shul - must be chosen with the approval of all (certainly most) of the members of that minyan. The Shulchan Aruch says clearly that the Chazzan (appointed or voluntary) must be “M’rutseh L’kohol” - he must be “desired by the congregation.”

No one is allowed to conduct any service without the approval of the congregation. This is the strength of the title “Shliach Tsibbur”- “messenger of the congregation.” He must represent his minyan to the degree that they all approve of his serving as their representative before the almighty.

Daven well and sing along!

Posted by thanbo at 1:26 PM No comments:

I’ve been listening to the shiurim of R’ Jeremy Wieder on Brochos, this year’s tractate being studied at RIETS of Yeshiva University. R’ Weider has a somewhat academic approach, which appeals to me – in addition to the traditional lerning of the text through rishonim and acharonim, R’ Wieder encourages his students to do what the Rishonim and Amoraim themselves did – check parallel texts, in Tosefta, Yerushalmi and halachic midrashim, to see how alternate versions of the sugya at hand shed light on the various issues being discussed.

Along the way, he brings up interesting factlets reflecting the academic approach to Talmud, which may not have much to do with the text at hand. Everybody goes off on occasional tangents, no?

Today’s factlet (less connotation of “spurious” than “factoid”) concerns the opening of the Shev Shmateta, a popular book in yeshivos, exploring the origin and meaning of various rabbinic decision principles, such as safek (doubt), rov (majority), chazakah (presumption), etc. Written in the early 19th century by the author of the Ketzos haChoshen, its attempts to quantify rabbinic principles of doubt-resolution in terms of probability, decades before mathematicians formalized it, are fascinating. Printed alone, it’s one slim volume, but with a good commentary, such as the “Shmateta Mevueret”, it can take up multiple volumes … but I digress.

Apparently, because the Shev Shmateta didn’t have all the texts that we have today, he brings a lot of complicated solutions to the following question:

Rambam postulates that from the Torah’s own perspective, without later Rabbinic accretions, all situations where the nature of the incident, or the ruling to apply to the incident, is in doubt, should be treated leniently, even where the law in question is from the Torah. We have a later idea, a rabbinic principle, that situations of doubt in a Torah law are treated stringency, but that rule is itself a Rabbinic stringency. Treated on its own terms, the bare Torah principle for dealing with situations of doubt, is to rule leniently. Safek deoraita lekula – a doubt in a Torah law is ruled leniently.

With that principle as a groundrule, then, the case of a mamzer (child of incestuous or extramarital birth) whose status is in doubt (perhaps he was from the husband, perhaps from the paramour, we don’t know), should be permitted to marry a regular Jew who is not hirself a mamzer. The Torah law is that a mamzer is not allowed to “enter the congregation of ”, marry a regular Jew; in a case of doubtful mamzer status, then, the above principle should tell us that s/he is permitted to marry anyone. Why, then, does the Rambam feel that it’s necessary to prove this case, that a doubtful mamzer may marry anyone, from a verse? If you have a clear rule, you shouldn’t need a verse to prove a specific case.

The Shev Shmateta notes this contradiction, and brings a lot of attempted Rabbinic solutions to solve this conundrum. The most convincing ones, apparently, maintain that Rambam really believed that a doubt in a Torah situation should be ruled stringently, like the usual principle dictates, and that the texts made a mistake in claiming that he believed that from the Torah’s own perspective, doubtful cases should be ruled leniently.

However, the Shev Shmateta didn’t have a lost teshuvah of the Rambam, that clears up the whole conundrum. In a manuscript of the Rashba, discovered after the composition of Shev Shmateta, the Rashba quotes a lost responsum of the Rambam that says that the Rambam’s source for his principle that “from the Torah, safek d’oraita lekula” IS this verse, the one that tells us that a doubtful mamzer is permitted to marry by Torah law. The Rambam really held that the verse proved that from the Torah’s own perspective, doubtful cases should be ruled leniently, because this case is ruled leniently (although in reality, since we follow the Rabbinic principle that safek d’oraita lechumra, a doubt in Torah law is ruled stringently, we don’t actually permit the mamzer to marry).

So the whole conundrum was caused because we didn’t know that the Rambam linked the doubtful mamzer case causally to the principle.

. Mamzer case: needs a verse to prove the Torah is lekula

. if the Rambam had the principle, why use the verse?

. The verse proves the leniency in the Mamzer case, which implies that the bare-Torah rule generally is lenient in cases of doubt.

Fascinating, no? I hope you could follow all that.