Creation: true or not, it's True: R' Wieder

Just listened to an mp3 of Rabbi Jeremy Wieder of YU, on the limits of non-literal interpretation of Scripture.

He sets the limits pretty far out, for non-halachic material. Halacha has to be interpreted as Chazal say, which may well be non-literal, but halacha is not affected by changes in science (pace spontaneous generation of body lice).

Then, he surveys the sources.

Aristotle's theory is theologically untenable. If there were a proof of it, Rambam would have to suspend his intellect, and surrender to the revealed Truth. Plato's theory only differs from our ideas in that for him, creation is "yesh miyesh" (from pre-existing existence), rather than our "yesh me-ayin" (creatio ex nihilo, from total nonexistence). It would probably be easier to allegorize than all the stuff in the first part of the Guide allegorizing the anthropomorphic verses in the face of the Truth of an incorporeal God.

Ramban on the Torah echoes Saadia's first principle, in explaining the rainbow in Noach - the verse seems to say that it was put in the clouds just then, but clearly it's part of the natural order, so that can't be literally true - it must be, that the rainbow already existed, but that it was given this new significance at this time.
Where is his red line? Matan Torah - the Sinaitic revelation, the founding moment of our people. That could not be allegorized, deliteralized from history, without disturbing the fundamentals of Jewish belief. Genesis 1-11, no problem allegorizing that. The Avos, he would be troubled by an allegorizing interpretation, but it doesn't cross his red line. The Exodus, an allegorical interpretation would really really bother him, but it could still be non-heretical. But Sinai must have happened, as stated, or else the whole Torah can't be True.
But cosmogony, evolution - no fundamental problem, as long as we're not dealing with "evolutionism" - a form of atheism centering on evolution - because evolutionary change is random to the human eye. But the knowledge of God isn't like the knowledge of humans - so God may have a pattern that we can't perceive.
And note, stories can be True, if not literally happened. E.g., Chazal say this of Job, it may never have happened, but it still expresses religious Truths.
A few gems:
Posted by thanbo at 4:42 PM 2 comments:

Complaint about this week's episode:

From an Entertainment Weekly article:

> Also infuriating: the running gag about Harriet's inability to tell a
> joke. She needed one for a speech, and Matt gave her one that she
> kept butchering in her attempts to retell it. Matt likened her gag
> mangling to an ailment.

OK, we can debate whether a sketch actor can tell a joke.

But it was the wrong joke for *her*. Wouldn't matter if she told it correctly or not, *she's* not the person to tell a Jewish-mother joke. At best it would just seem incongruous, not funny, and at worst, some kind of put-down. The whole point of the Jewish mother joke is that through sarcasm, the mother makes the son feel guilty. So what's a blonde female Evangelical Christian's relevance to this joke?

It's like, well, someone assigning me to tell a self-denigrating black joke, when I'm a tubby bearded Orthodox Jew of Eastern European descent. It would look bad, if not offensive.

I raised this on an Aaron Sorkin discussion list, and interestingly, the other person who agreed with me had a Jewish name.

Another commentor held that the whole exchange is "ironic", that an Evangelist would be told to tell a Jewish joke, that a comic couldn't do stand-up. "What am I missing?"

Within the context of us watching the show, it's ironic, because "look, Matt the Jew gives Harriet the Evangelical a Jewish joke to tell. Ha ha."
Posted by thanbo at 10:36 AM No comments:

Joel Sirkes Bach (1762-1821), the long-lost grandchild of J.S. Bach. His work recently turned up during a search of the PDQ Bach archives at the University of South North Dakota at Hoople.

Composer of a series of 18 symphonies based on the blessings of the Amidah. Why 18? He was trying to fix the last one, as part of a polemic against the new Enlightenment Romanticism, but died in the middle.

His Second Sonata for Clarinet, Keyboard and Percussion foreshadowed the Klezmer movement in its daring adoption of Eastern European folk motifs and styles of ornamentation. He remains one of the best sources of early documentation of this style. The shift from clarino to trumpet between the second and third movements expressed his longing for the rapidly-disappearing instrument. Use of the ophicleide and ocarina in the Bulgar-Rondo, however, is gratuitous.

As Kapellmeister of the Altneuschul in , he created choral settings for many zemiroth, bringing consciousness of the beauty of Sabbath observance to the early Enlightenment, although they were only rarely performed at the , and then only at the after-dinner services.

His untimely passing at the tender age of 59 was due to a großbass blokflöte falling on his foot, which subsequently became gangrenous.

His biography has recently been reprinted by Yashar Books. 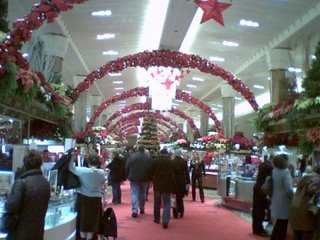 Stopped by Macy's this evening. Watched various groups rehearse for the Thanksgiving Day Parade - a group of boys in a drumline marching up & down 34th Street, some tap-dancers from the Monty Python tribute musical SPAMALOT.

Wandered into the store. Poinsettias everywhere, banners, wreaths, stars (the store's logo), Christmas everywhere. A grand arcade down the central corridor of the main floor. 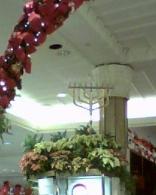 And up at the end, next to the escalators, two token acknowledgements that Not For Everyone Is Christmas Paramount:

Good Enough for Us, Not For You

The latest scandal to roil the J-Blogosphere: a mikvah inspector in Jerusalem witnessing rampant man-boy [relations] in a mikva in the main Charedi area of Jerusalem. Harry Maryles called the guy to confirm his story, which he did.

Violent protests against the Gay Parade, which is primarily attended by non-religious, and doesn't actually feature any public lewd acts.

A non-sticky band-aid on mikvaot where Our Guys go, where lewd acts were witnessed. Where the Haredi courts can't do anything more because the guys who financially support the mikva are the ones alleged to be committing these acts. Money talks, after all.

I get it:
It's OK for our guys to be Evil, but not for You Guys.

Maybe I should switch to The Black-Hat Uniform. It would let me get away with Abominations (toeivot): cheating in business, like the Shevach butcher in Monsey, or gay sex, like these guys in Jerusalem, or idolatry, like certain elements within Lubavitch. The Torah does use the same word (to'eivah, abomination) for all these sins.

Relative morality. That's what I love about Frummak Judaism. Not.

This is not to say, God forbid, that there is a link between wearing the uniform and tolerating, let alone committing, evil. 99-44/100% of guys who wear The Uniform are, I'm sure, many from personal acquaintance, terrific, learned, ehrlich people. But in wearing the Uniform, one is saying "Look at me, I take pride in my great level of Jewish committment and observance."

Which is why when one of them falls (Jack Abramoff, anyone?) it makes a much bigger splash about the moral laxity among Jews. Visible Jews doing wrong, create a greater chillul hashem than some lesbian gal in a tank-top, because the evil is seen as stemming from their greater committment to Hashem and His Torah. I won't say it's fair to those who choose to wear the Jewish Badge, but it's still a real perception.

That, too, I can say from personal experience. As in, before moving to Flatbush, and living among people who wear The Uniform, I too resented the Uniform-wearers for their trumpeting their frumkeit in their clothing. And thus, when I saw some of them morally fail, in various ways, my first response was "Zoo Torah vezoo sechorah? This is the end-result of a life of learning? Feh! I should throw off the whole thing, if that's the end result!"

Only when I learned to see the individuals under the Uniform, did that go away. 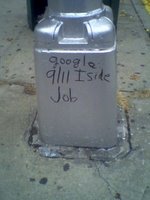 Google is now part of the American psyche.

Not only is it a verb, "just google /some subject/", it is now a graffito.

Don't need to express an idea concisely on a lamppost/wall/toilet stall, refer to it via Google.
Posted by thanbo at 11:46 AM No comments: