Can you tell a Bible by its cover?

Well, maybe not. I was in a local bookstore this afternoon, and saw a display of JPS English and Hebrew-English pocket-sized Bibles. They had a black covered Hebrew-English, a pink-covered all-English (I guess for girls), the website has other colors such as black, white, and green - nice and neutral. The translation is the usual New JPS - terrific translation, been using it for over 30 years. Where it says "b--b meaning of Heb. uncertain", it's a sure sign to go check out the meforshim (commentaries, mostly medieval).

But the one that caught my eye was the one printed in "Denim". A back-pocket, to be precise, mirrored on the back of the book. IOW, the cover of this Bible was a tuchus. I don't know what their cover-designer was thinking, probably trying to be "hip" or whatever, but what comes across is "the Tanakh is compared to a tuchus." Or maybe, the product of the backside? Really not the message I'd think a Jewish publisher would want to project about their flagship product.

Hm, thinking about denim-jeans images - I had a passbook bank account when I was in Jr High and High School. The original passbook was the same design as my parents' - a photo of a local park. I lost it at one point, and had to get a replacement, so they gave me a "kids'" model - with a drawing of a pair of jeans. I felt rather condescended to. Maybe designers of kid-versions of adult objects should consult with real children of the age they're targeting.

BTW, "tuchus" may sound Yiddish, but it's really direct from Hebrew - tuchus is an Ashkenazic pronunciation of "tachat", which means "underneath".
(image copyright Jewish Publication Society, used without permission qua fair use - quotation in a review) 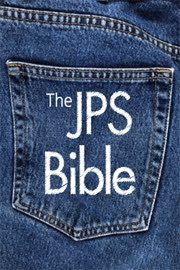 Posted by thanbo at 4:22 PM No comments:

Gil Student wrote an article in Jewish Action, the OU magazine, on the changes in Jewish and mainstream publishing. He avoided the one big question looming on the horizon of Jewish publishing, as it is beginning to make inroads into mainstream publishing: the e-book.
He addresses the information-chunking and short-attention-span issues pretty well.

But there need to be heterim found for e-book readers on Shabbos, if we're not to have people dropped from Orthodoxy for "half-shabbos", esp. as more and more seforim are online in PDF and etext, if they wish to learn Torah stored in an ebook reader. Do you really learn all those seforim in your shrank, bought when a kid in yeshiva, or are they mostly for show, and occasional reference?

I carry around a good-sized library in my e-book reader, whether Torah or fiction, academic or popular material. Until people start using iPads or Kindle DX's widely, things like Gemara pages will still be difficult, although who knows - maybe the small-format Gemara may yet make a comeback. I have, for instance, a scanned PDF of Bava Kamma from the Lemberg half-page edition on the ebook-reader. Legible, but barely, on the 3x4" screen. But if I can get e-texts of Rishonim from Bar-Ilan, in pieces (how many blatt gemara does an in-depth once-a-week shiur cover, after all), that makes it more accessible to be on the Palm or the EZ-Reader.

The standard Gemara page was defined by Bomberg in the 1520s, because he issued the first full set of Shas. It made sense to keep using the same pagination for standard reference. Why did he use that page size (folio pages)? Ultimately, because of the size of sheep. Sheep are a certain size, so their skins are a certain size, which governs the dimensions of parchment pages made from those skins.

Technology has changed. We need no longer be governed by the sizes of medieval sheep. It is certainly possible to maintain indicators to standard pagination in text of other configurations (just look at, e.g., a two-volume two-column Zohar of the 17th century which has indicators of the pagination of the by-then standard three-volume single-column Zohar, so you can find page references easily.

So too here - as e-readers and pad computers improve, we should be able to use them with cross-linked etexts of the Talmud, Tanach, Midrashim Rishonim and Acharonim. Must we continue to spend hundreds of dollars on dead trees for use on Shabbos alone? Perhaps rabbis should work with electrical engineers to design an e-book reader that will not violate Shabbos, as Tzomet has done for doctors and the handicapped. Perhaps we should resurrect the arguments used by RSZA, and only not implemented out of respect for the Chazon Ish, and find ways to use solid-state technology lehagdil Torah uleha'adirah. After all, we don't slavishly follow the Chazon Ish, at least not in Galut, where we don't eat normal gelatin (which the CI approved).

If we don't find ways to adapt to such changing technology, then we, and our dead-tree obsession, will be left in the dustbin of history, along with our decaying paper.

Zohar maybe not from Rashbi

I was reading the Zohar in the Berg-ite translation, and came across the following passage:

30. There are questions that are the garments of the Ha-lachah, NAMELY THE GARMENTS OF MALCHUT, of which it says "inwrought with gold" - as it is written: "The King's daughter is all glorious within: her clothing is in-wrought with gold" (Tehilim 45:14). You, AMORAIM, cut THE GARMENT INWROUGHT WITH GOLD into several le-gal sentences and later fix and explain them away using various arguments.

31. If one chapter of the Mishnah is missing, and it has been maintained that something is missing from the Mishnah, you fix it. FOR EXAMPLE, IN PLACES WHERE IT IS STATED IN THE GEMARA: "A CLAUSE HAS BEEN OMITTED, FOR THIS IS THE WAY WE HAVE LEARNED IT...," such is wanting that can be numbered. If a sim-pleton comes and spreads an evil report of the craftsman that cuts the garments, saying: The Torah is lacking - STATING THAT IN THIS PARAGRAPH OF THE MISHNAH, A CLAUSE HAS BEEN OMITTED. Yet, it is written: "The Torah of Hashem is perfect," (Tehilim 19:8) perfect in all the members of the body, the 248 positive precepts, as written: "You are all fair, my love; there is no blemish in you," (Shir Hashirim 4:7), and perfect in her garments. How can anything be lacking in the Mishnah?

32. HE ANSWERS: Say to him - look carefully and find the MISSING piece. You may find it mixed with other verses and Mishnahyot, MEANING, IT IS THE CUSTOM OF THE TORAH TO BE LACKING IN ONE PLACE AND RICH IN ANOTHER. For it is the way of the craftsman to cut garments into several pieces, AND THAT WHICH IS MISSING IN ONE PLACE IS FILLED UP IN ANOTHER. The students, inexperienced in connecting the Halachah to those pieces THAT ARE IN ANOTHER PLACE, confuse the sentences and questions, and cannot explain the dilem-mas until the craftsman comes and explains all the doubts they have. At that time, Halachah the daughter, NAMELY MALCHUT, rises before the King, perfect in eve-rything, in body, garments and jewelry. And in it the verse comes true: "And I will look upon it, that I may remember the everlasting Covenant" (Beresheet 9:16). Sometimes the craftsman has an experienced student whom he sends to correct them, NAMELY ELIJAH, AS WAS MENTIONED BEFORE.

In any case, this is clearly the textual criticism that makes up much of the Gemara's discussion of Mishnayot. This story praises the early Amoraim for their textual activity (the early Amoraim feeling freer to emend the text of the Mishnah).

If Rashb"i lived in the late Tannaitic period (according to the JE article on Simeon ben Yohai, citing Graetz, he fled to the cave c. 161), it had to have 50-100 years after his time that this story took place. Thus, this part of the Zohar necessarily postdates Rashb"i.
Posted by thanbo at 11:22 AM 5 comments: